Murder becomes personal for Lord Riley Rochester when his sergeant's daughter is caught standing over the corpse of her former employer. She's covered in blood and has the murder weapon clutched in her hands.

Riley knows that Maureen Salter is incapable of committing murder but is also aware that if he shows her any favouritism then his detractors will seize the opportunity to undermine his position as one of Scotland Yard's leading detectives.
As Riley and Salter delve deep into the world of Victorian London's millinery trade, they discover professional jealousies and personal resentments that cast suspicion upon a widening circle of rivals and family members, none of whom mourn the loss of the victim.

Lied to and misled at every turn, can Riley get to the truth and discover who had the most compelling reason to commit this most vicious of murders, thereby saving his own reputation and that of his stalwart sergeant…

Summer 1882 – The murder of Ezra Dawson, a footman employed by Sir Philip Randall, at first appears to be the result of a drunken brawl that occurred late at night in an alleyway beside a Clapham tavern. Chief Inspector Riley Rochester and Sergeant Salter suspect darker motives when they discover that Ezra had been romantically involved with his employer’s wife, a situation that held the potential to embarrass Sir Philip and his grown children. He had also put himself at odds with local criminal kingpins by establishing an illegal sporting club in the Clapham district.

With half the females south of the Thames mourning Ezra’s demise, all the males in Sir Philip’s employ pleased to see the back of him, and some of Ezra’s own family members harbouring grudges against the favoured son, the case proves to be anything other than straightforward. Riley and Salter are misled and misdirected at every turn, leaving them with a plethora of suspects and few answers.

It’s Spring 1872, and Lord Riley Rochester has accepted promotion to detective chief inspector at Scotland Yard. His skills are tested when the fabulously wealthy Lady Violet Pemberton, a contemporary of his mother, is found dead under suspicious circumstances on the morning after her seventieth birthday celebrations. Her warring relatives all had reasons for wanting the old lady dead, but Riley is unable to prove which of them committed the crime.

With the help of Sergeant Jack Salter, Riley delves into Lady Pemberton’s personal life, finding evidence of a scandalous past that only serves to muddy the waters. Was the crime motivated by greed, a family feud or a burning need for revenge? And who among them all would kill to prevent the details of a past indiscretion becoming public knowledge…

The winter of 1871 is especially severe. When the fabulously wealthy young recluse, Sir Theodore Allen, is found dead from cyanide poisoning, Lord Riley Rochester hopes to discover the identity of his killer quickly. He’s preoccupied by the fact that his wife’s imminent confinement and has decisions to make about his career path.

Frustratingly, Sir Theo’s circumstances are far from straightforward. He had invited his estranged family to visit and his murder took place on their first night beneath his roof. Greed and resentment seem like the obvious motives. Sir Theo was about to astound them all with the announcement of his engagement to Miss Cassandra Bradshaw, dashing his rapacious relations’ hopes of inheriting.

Riley has too many suspects and they all appear to have something to hide, especially Sir Theo’s long-standing servant and friend, Matthew Trent. As Riley and his dependable sergeant, Jack Salter, delve deeper they become convinced that the murder has something to do with the death in a house fire of Sir Theo’s parents twenty years previously. Had Sir Theo been delving into that unhappy event and could he have called his relations together to reveal his findings?

When his father’s long-standing secretary is killed the day after Theo, Riley must pit his wits against a wily and desperate individual who will stop at nothing to cover his tracks and retain his liberty. Can Riley keep his mind on the case and catch him before he strikes again… 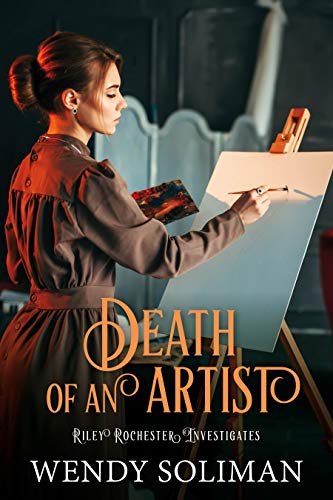 Inspector Riley Rochester returns from his honeymoon to find that all is far from well as Scotland Yard. His immediate superior, Chief Inspector Danforth, is making life almost impossible for Riley’s team, Sergeant Jack Salter in particular.

Riley and Salter are thrown into another case – the murder of Melanie Mottram, a governess and aspiring artist. The detectives discover that far from being an innocent victim, Miss Mottram was a calculating and manipulative young woman, not above using her natural attractions to get ahead.

The leading suspect, one of the young woman’s art tutors, turns out to be Jack Salter’s nephew.  Danforth seizes the opportunity, calling for the immediate arrest of the artist and the end of Salter’s involvement in the case. With Jack’s family loyalties threatening to destroy his career as well as Riley’s, the stakes have never been higher. With a long list of suspects, all of whom seem desperate to cast the blame elsewhere, what chance does Riley have of discovering the truth…

Death of a Scoundrel

Roderick Woodrow is a ladies’ man. In the upper echelons of Victorian society he is much sought after as a “spare man” for events, parties, soirees and receptions. He is suave, sophisticated, charming and devilishly handsome – until he’s found bludgeoned and strangled to death one morning in his tastefully decorated rooms.To Inspector Riley Rochester, he represents an occasional acquaintance from his own class. Sergeant Jack Salter looks upon him as an idle womaniser with few morals and even fewer scruples. It doesn’t take long for Riley and Salter to discover the depths Rod Woodrow has plumbed to finance his lavish lifestyle. While the female half of society weeps at his demise, it seems that almost every man in London had a reason to want Rod dead. Jealousy, reputation, money, blackmail, double standards, hypocrisy and ruthless ambition are involved in a case that forces Riley to make a stark choice between duty and family loyalties.

Death of a Prosecutor

Inspector Riley Rochester’s latest case strikes close to home. When his friend, notable barrister Sir Robert Glover, is stabbed to death outside his chambers, there are far too many suspects. Sir Robert’s family, those he worked with, shadowy figures from his past and every resentful criminal he ever prosecuted. What's worse, the case is inextricably linked with a Scotland Yard colleague's rather slipshod investigation, and Riley must be diplomatic in his dealings with his superiors and fellow officers if he's to get to the truth.

Riley and his sergeant, Jack Salter, take to the task with their customary professionalism – although Riley’s judgement is clouded by nervous anticipation of Amelia Cosgrove’s response to his proposal of marriage and by the sudden decline in his nephew’s health. Knowing that if his nephew dies Riley will become his brother’s heir, he must come to terms with the fact that he will one day be the Marquess of Chichester whilst simultaneously trying to solve the hardest case of his career to date…

Death of a Courtesan

London 1870 Detective Inspector Rochester—Lord Riley Rochester—of Scotland Yard’s Detective Department and his sergeant, Jack Salter, are called to a high-end brothel to investigate the murder of one of its inhabitants. Her throat has been cut from ear to ear after the customers had left for the night and the doors had been locked, and no one admits to hearing a thing.

As Riley and Jack delve into the beautiful young victim’s background and the reasons for her fall into prostitution, an increasing number of suspects with compelling reasons for wanting her dead emerge. Riley is astounded to discover that his nemesis, Chief Inspector Danforth, is one of the brothel’s regular visitors. He was there on the night of the murder, spent an hour alone with the victim and must be viewed as a suspect. Riley could be forgiven for revelling in Danforth’s downfall after all the insults he has suffered at the chief inspector’s hands, but his concern is for the reputation of the Detective Department as a whole and so he does all he can to shield Danforth from public derision.

Unsurprised by the depths of depravity some men willingly sink to in order to find gratification, Riley is unprepared for the damage that could be done to the reputation of his own family if he doesn’t get to the truth. But at what cost to his personal ambitions…

Death of a Debutante

In 1870s London, Scotland Yard’s famous Detective Department is still in its infancy. Surrounded on all sides by critics and detractors, it has yet to earn its reputation. Lord Riley Rochester, younger son of a marquess, works as one of its first detective inspectors—but his uniformed colleagues view him with suspicion and his immediate superior resents all he stands for. With his career choice frowned upon by his own social class, Riley has his work cut out proving himself. Attacked on all sides, Riley’s only respite comes in the form of attractive widow, Amelia Cosgrove, and his effervescent niece, Sophia.

When a debutante is murdered in the home of Lord Ashton, a man who considers his position and reputation as a fragile framework for his ambitions, Riley’s vengeful superior hands him the investigation, hoping to see him fail. As Riley and his sergeant, Jack Salter, delve into the circumstances surrounding Emily Ferguson’s death, it quickly becomes apparent that his own class expect him to exonerate its members from all blame. But the murder was committed at a society event, and Riley’s conscience won’t allow him to ignore the evidence that points to one of the guests—or hosts—being the killer.

With Salter proving himself increasingly indispensable and Amelia unofficially helping with some of the more sensitive issues, Riley quickly discovers that the case is anything but straightforward. Everyone appears to have something to hide and no one seems to be telling him the whole truth. Fending off a mother determined to see Riley married and abandoning his career, and with Sophia clamouring for his attention, Riley is run ragged. Tempers fray as a heatwave holds London in its sweltering grasp and when a second death occurs, Riley fears he may be incapable of preventing a terrible miscarriage of justice.

As the tension escalates, Riley comes under increasing pressure to solve both murders. Will he and Jack manage to uncover the true identity of the killer without endangering those whom Riley holds most dear…